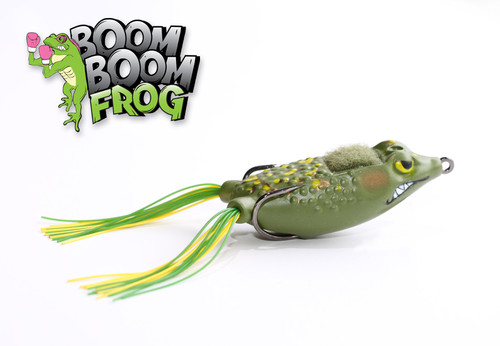 The one of a kind Boom Boom Frog with Frogfur™  Stanford Baits teamed up with  Elite Series Pro Fred Roumbanis to develop the ultimate Frog. A Frog that has all the innovative fish catching components. Frogfur™ is a patented pending innovation that greatly increases increases your fish hook up ratio!  The Frogfur™ snags the sand paper like rigidness of the Basses mouth. Making it harder for the fish to miss or throw the topwater Frog. The Diamond shaped belly weight was designed so that the weight doesn't interfere with the hook. Allowing the hook to pop further up on hook sets. It also features a razor sharp Mustad Wide Gap Frog hook.

This product hasn't received any reviews yet. Be the first to review this product!